skip to main | skip to sidebar

One of the best things about working at the University is every now and then I get to pretend that I am the person I was when I was a student. Ie: A person with a lot of time. I have just spent the last 40 minutes listening to Obama speak about his hopes for his nation. I thought what he had to say was mostly fine and very American. But mostly I enjoyed the fact that I could stand in the University bar, have some lunch and watch the live CNN cross and um, call it work.

What made it feel all the more like subterfuge was that it is a gloriously sunny day and on these days I try my best to spend my lunch hour walking around campus to get a break away from the computer and stretch my legs a bit. On rainy days I head to one of the museums or art galleries we have on campus. I am trying hard to get a bit fitter (and smaller) by the time I turn 40 at the end of the year. (In fact I have said I will only celebrate my 40th if I am two sizes smaller!). So really it was sabotage as Thomas and I rode to school this morning (and right now Gaye and Al are biking over to pick him) and I have just undone that by eating a hamburger and watching Obama.
Posted by Clare at 2:19 pm 1 comment:

This week I bought four – that is right four - Father’s Day cards.

In this life of mine as a two-mother household I have moments where I feel particularly not straight and part of the general population and most of the time where I fit right in. I couldn’t work out exactly what this moment was. When I bought the cards the woman at the checkout said ‘gosh how many Dad’s do you have?’ I didn't even know how to answer.

Oh, okay I will tell you who they are for; I know you are dying to know:
And yes I did by individual ones and resisted the temptation to buy four the same...I have standards.
Posted by Clare at 11:12 am 3 comments:

Al spoke his first word today - ball. He did it twice in a row. (he is pretty obsessed with balls).

When my Dad rang today I told him. He reminded me that Thomas' first word was shoes (shhezz). Mainly I think because putting on ones shhoozz was something we did(do) before we went outside somewhere. I didn't have a blog then just a journal ...

Al also has developed this half closed eyes, scrunched up nose look to indicate he is not happy with some minor infraction. It is gorgeous!
Posted by Clare at 4:15 pm No comments:

One day last week Al slept until 8:40 in the morning. By 8:40 the rest of us were up and he only likes to have his boob lying down these days. So Gaye didn’t bother. He got to the end of the day and so did she (she gave up night feed about two months ago) without a lunch time snack or an afternoon lie down with some boob.

He has not shown any interest again since. And so it seems he is weened.

Yesterday Gaye ate wheat, we have a plan to go out and eat eggs together and read the weekend papers from cover to cover.

Breakfast out on a Saturday or Sunday morning was a big tradition in our week before Al. Gaye and I read the papers, Thomas talked and read kids magazines or the comics from the paper on a Sunday. Since Al it has become more difficult – especially since his allergies make it no fun for him and that we have to organise his breakfast anyway so may as well do it at home.


Thomas came back from the snow with lovely gifts – bought with his own money – for Al. And a gorgeous photo of him flying down a slope for us. He came full of stories and bruises and looked relaxed and happy. He spent Sunday in bed or on the couch watching ‘lympics.

He is full of questions I can’t answer – like how the bike races work for example. He went back to school for a whole day yesterday only to spend last night vomiting and is now at home on the couch.
Posted by Clare at 2:51 pm 1 comment: 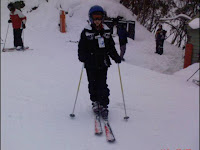 Thomas is at the snow for his now annual dose of skiing. He has two more days of skiing to go. Last night when we were talking on the phone he told me ‘it was the most wonderful day of all our days so far. There is lots of snow and the sun was shinning. It was beautiful. The coffee man (person at the coffee shop where they buy lunch each day) was jealous of us.' He has moved up to using stocks and is pretty pleased with himself. It has been impressed upon him that skiing is a real treat and an expensive holiday and so he is also very impressed with the fact that the 'teachers in the milo club' (instructors) get 'free lift tickets, free boots and skis.' He thinks it might make a good job. (hmmm) I added "in the University holidays!"

Al has been ‘walking’ in between us while we sit on different chairs for a few weeks now. I think his record would have been around 6 – 8 steps. Yesterday the babysitter said he walked between her and and the kitchen draws and took 15 steps in a row. He still doesn’t use it as a form of getting from point A – B thou, it is more like a game. His ‘vocab’ is increasing he is using lots of new sounds this week and has started to babble at us in what seem like sentences but no actual words yet. He certainly is able to communicate with us effectively with signs and grunts to get all he wants thou!

Most endearingly he has started to throw the odd tantrum. Currently this involves laying himself or his head down very carefully on the floor or the highchair table and sometimes builds up to a bit of a cry. Mainly thou it is a scrunched up face that I really hope we catch on camera at some point.

I spent last Saturday painting my house that my sister is living in and that we own together. It goes on the market next weekend. Gaye and I are busily planning how we are going to improve our place with the funds that come out of it. Mainly we will be reducing our debt levels so that we can save for things!

Gaye’s work is a bit quiet which was a blessing as her parents came into town for a few days. Al was appropriately (and thankfully) social with them and they enjoyed a trip on the harbour. Gaye and I spend as much time de-briefing about family visits as the actual visit. But I thought this was a pretty good one.

I went to some career coaching last night as I am still feeling pretty lost about where and what I should do next and this job – thou much improved – really doesn’t make my brain engage often enough. The career coach has suggested the area of ‘corporate social responsibility’ which I think sounds like a possibility…
Posted by Clare at 10:13 am No comments: 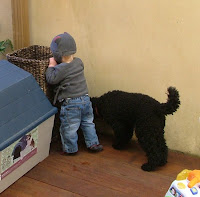 Al and Lightning are the very best of friends.

I am not really a pet person. But it has to be said that Al and Lightning are very cute together.

They both like to throw themselves onto the cushions in the lounge and think it is fun to roll off and do it again.

Lightning likes to bark at people walking past.
Al likes to go to the door to see what he is barking at.

When Al gets in trouble he sometimes throws himself on Lightning who puts a paw on him as if for comfort.

When Al crawls off down the hall if Lightning thinks he has got to far from us he will 'round him up.'

Lightning is very gentle with Al and we are trying to teach Al to be gentle with Lightning.
Posted by Clare at 4:21 pm 1 comment: 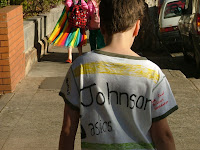 This week was the fun run at school. Thomas has been most interested in the raising of money and - a bit hilariously - entered into serious training... the night before.

The kids were encouraged to dress up in 'teams' there were angels, superheroes, kids in P.Js and one group of Greek goddesses (truly).

Thomas' team decided to dress up as famous Australian sports people and after his initial interest in being 'Cathy Freeman in that running suit' was nipped in the bud by this non-sewing skilled mother he decided to be Patrick Johnson. We spent sometime on Patrick's website and he made up his t-shirt with '@sics' as his sponsors and 'the Fr@d Hollows Found@tion' written on the sleeve (Patrick is a patron it seems).

He was pretty pleased with himself. Thou he did think that perhaps we should paint his face black (a little too un-P.C for the inner west of Sydney!)

Even more impressive was his running effort. Each lap was 500 mtrs and the children (grade 3 - 6) were encouraged to run 20 laps. Thomas finished his 20 with time to spare so he ran another 9 laps. Yup 9 years old and almost 15kms. He went on that afternoon to play soccer in the school team and the next morning in his outside school team.

what we said before was